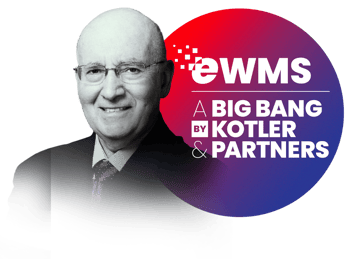 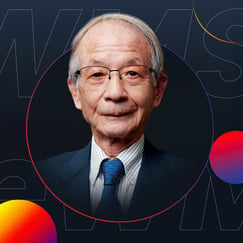 Professor Nonaka started with notes the state of the VUCA world we are living in, and the limitations of traditional business strategy models and modern capitalism. In an age where everything in our daily lives is mathematized and digitalized, over-analysis, over-planning, over-compliance is everywhere. Strategy is all about analyzing, which lacks empathy.

Capitalism also lacks empathy, its core credo being how to maximize shareholder value and thus dismissing human morality and ethics. However, businesses are finally realizing the importance of the well-being of communities, and are recognizing that pursuing only the maximization of shareholder value is actually harmful to the society. Businesses are also realizing that "human resource" is not mere resource, but value-creating agents.

So, how do businesses create knowledge through the value-creating agents in this new age? Professor Nonaka asked.

Professor Nonaka referenced his SECI model as a way to create knowledge, especially in these times of uncertainty.

The SECI model describes the dynamic process of knowledge creation throughout the organization as an upward spiral, one that involves four steps: (1) Socialization (empathizing with others and the environment to feel and sense reality), (2) Externalization (engaging in a dialogue to identify and conceptualize the essence of reality), (3) Combination (putting those different concepts and ideas together to develop a wholistic, coherent system, theory, and/or narrative), and (4) Internalization (practicing such a system, theory, and/or narrative through action).

Professor Nonaka emphasizes that the SECI model is an organizational--not an individual--model to explain how teams and organizations can create new knowledge. He suggests that a team always starts with two different people coming together ("creative pair"), who engage in serious "intellectual sparring" as he calls it - two people engaging in dialogues, pouring their heart and soul into the discussion to resolve an issue or to generate innovation. Through these rigorous dialogues, people generate meaning through empathy. It is essential to devote one’s self to the environment and other people just like a relationship between a mother and her baby where they feel each other as one entity. It is only through dialogue based on a deep level of empathy that we can get a real sense of commonality and difference between ourselves and us, and thereby create new meaning and value. Creating this oneness in a team or an organization through deep empathy enables them to spur innovation. 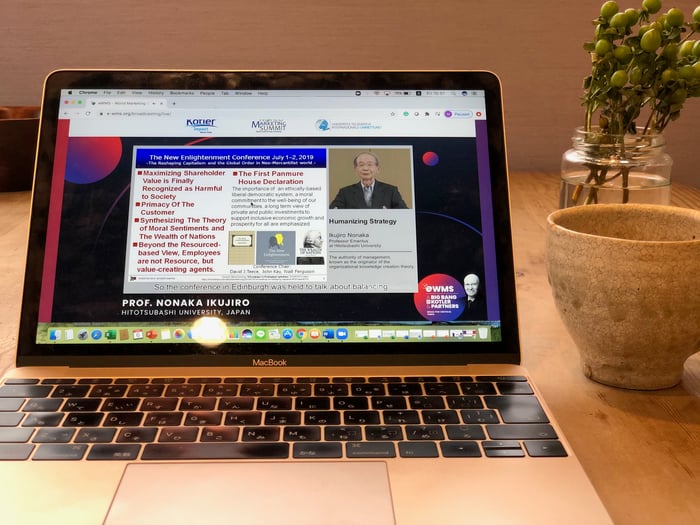 So, how then, can an organization create this dynamics of SECI spiral to generate new knowledge in a COVID-19 environment, Professor Nonaka asked.

In an era where close physical contact is restricted, it is difficult for people in organizations to engage in "intellectual sparring." Professor Nonaka acknowledged that it is difficult to nurture a deep dialogue online, and he argued that people need to identify a productive balance between online and offline engagements.

Professor Nonaka suggested that actually seeing people face to face and sharing common "ba (space)" with them serve as a springboard for empathy and knowledge creation. On the other hand, having more time with the self and engaging in self-reflection with deep thought also enrich the quality of knowledge creation. Keeping the balance between these two will be the key to adapting to these times.

Last but not least, Professor Nonaka gave the following advice to the audience who are spending many hours working from home; 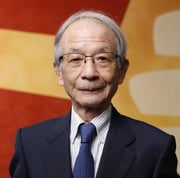